Posted on January 1, 2014 by Bryan Rosenbaum

After I attended AnDevCon earlier this year I started working on a native Android app that solved one of my biggest needs: easily saving an article, video, or tweet to come back and read later.

Most of the time this happens when I’m catching up on twitter while I’m [waiting in line at the grocery store, eating a quick snack, waiting for a meeting to start, etc.] – so I’m scrolling through the dozens of tweets in my timeline since the last time I checked when I see something that peaks my interest, but I know I don’t have time to read it now. In the past I would click the URL to open it in the browser, click home, then go back to twitter and keep going through my timeline.  When I had time to go back I would open the browser and the article would be there.

While that process works, it’s really not ideal. So I decided to create an application called “Later”. 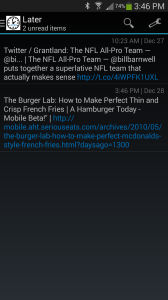 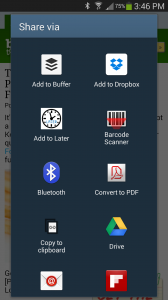 You can download the app from the Google Play store by clicking the link or scanning the QR code below.
https://play.google.com/store/apps/details?id=com.bryankrosenbaum.later

Similar to my experience developing the Later application, I really wanted to treat this as a learning experience as opposed to trying to get a lot of users for my app or make money. Here’s what I wanted to accomplish:

I have three things I want to accomplish next with this app:

Posted in My Projects Tagged with: Android, Later