This past weekend I flew on a 6pm flight from Atlanta (ATL) to Orlando (MCO) and checked one bag. We arrived around 7:30pm, but the checked bag did not. Over the course of the next 18 hours, I realized that I had more knowledge about where my bag was than Delta (and Delta was pretty incompetent). 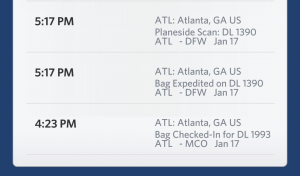 You know the feeling when you’re waiting for your bags and the first group comes out – your bag isn’t there. Then the second group – your bag still isn’t there. Now about half the bags are out and you’re starting to worry. My mindset was: “Oh no, maybe my bag didn’t make it. Wait, that can’t be…we checked in 2 hours early and they’re scanning all of the bags now as they get on and off the plane.”

We waited a little while longer and no more bags came out. I still thought there was hope since there were about 15 other people still waiting at that claim, but I decided to pull up the Fly Delta app and scan the tag barcode: my bag went to DFW.

Dallas! Why the heck did my bag go to Dallas? More importantly, it had two scans that said it got on a flight to Dallas. How are there not checks and balances in place to say “Wait a second, this bag is supposed to go to Orlando, not Dallas…DON’T PUT ME ON THIS FLIGHT”?

So I went to the Delta baggage service desk and the nice lady told me what I already knew – the bag was on its way to Dallas. Worse, she couldn’t tell me when it would get back to Orlando. I received a crappy travel bag with items that had lower quality that what someone gets on a first class international flight. I also was armed with $50/person to buy “essentials” (we needed diapers, clothes for 3 people, and toiletries among other things).

I was informed that the bags would be delivered to the hotel when it arrived in Orlando.

Before I went to sleep that night, I saw that my bag (via the Fly Delta app) was en route to Orlando on an American Airlines direct flight from Dallas and was set to arrive at before midnight. I went to sleep thinking the bag would be at the hotel when I woke up in the morning.

At around 8:30am the next morning I went to the hotel reception desk with high hopes and low expectations – no bag. So then I called back Delta who said “We don’t know where your bag is, and it was on an American Airlines flight so we can’t track it.” Excuse me? I checked the Delta app again – yup, my bag arrived in Orlando last night around midnight. How is it that I know where the bag is but the Delta baggage people DO NOT?

My next step was to call the American Airlines baggage desk at the Orlando airport. And wouldn’t you know it, THEY HAD MY BAG! What I found to be more frustrating was that American Airlines had called Delta to get them to pick up the bag, but nobody answered the phone.

One Last Chance for Delta

I was going to give Delta one last chance to fix things. I called Delta’s baggage service desk and told them my bag was at the American Airlines desk in Orlando and told them to go pick it up. When I asked how long it would take to deliver, the Delta rep couldn’t tell me. (Seeing a trend here yet?)

I went to breakfast with my family and then got ready to leave the hotel for the day to enjoy my vacation. Before I left, I wanted to see how things were progressing so I called Delta back (it was around 9:45am); they still had no update on the bag, when it was getting picked up, or when it was going to get delivered. They didn’t even have a clue as to whether it was picked up yet, even though I told them exactly where it was an hour and a half beforehand. 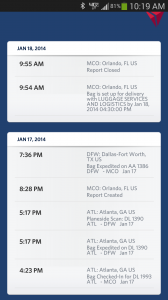 I called my new friend at the American Airlines baggage claim desk at the Orlando Airport and he told me that my bag was still sitting there. He also said he called Delta again to pick up the bag, but they still hadn’t arrived. Finally, I told him to hold the bag and not to give it to Delta – I was going to pick it up on my own.

I then called Delta and told them what a shitty job they’ve done, but the lady on the phone didn’t seem to care. She closed out the report as per my instructions and that was that.

Posted in My Stories Tagged with: Delta, technology