A few months ago I saw the announcement that August Smart Lock was going to be sold in Apple Stores.  This told me they were ready for prime time.

I’ve always been interested in the “Internet of Things” and smart house improvements, but hadn’t really pulled the trigger on buying anything. But the August Smart Lock was intriguing to me. I could control the lock from my phone and it could automatically detect when I was entering/leaving (via Bluetooth) so I wouldn’t need to even use my phone? Sign me up!

So I did a little more research, found a lot of positive reviews (and a handful of negative ones), and ended up buying it for $250. The only disappointing thing was that it was going to take ~3 months to arrive. Bummer.

A few months later, around the time I had completely forgotten that I had ordered the smart lock, it arrived in the mail.

Installation was a breeze. It seems like companies like August and Nest realize one of the biggest challenges for customers is installation – it’s the first impression, after all, and if you can’t install it then you can’t use it and will probably return the product. They’ve definitely spent time working on their installation guide and I had my door setup in about 10 minutes. I am by no means handy, so that’s a testament to how easy the process is. 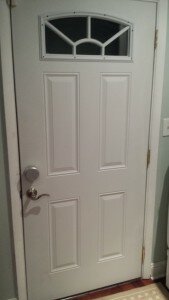 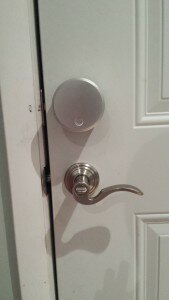 I chose to install the lock on my garage door. The same external piece is used on the outside (garage) side of the door so you can still use your physical key, but the inside piece is replaced by the August Smart Lock. You can also manually rotate the inside lock instead of using the application if you want.

After I physically installed the lock, I downloaded the app from the Google Play Store, and synced it up in about 5 minutes. Part of that included a quick calibration of the lock.

The application uses your phone’s Bluetooth to interact with the lock.

After I installed the new lock, I was really excited because I thought I would never have to use my keys again. Perhaps I was a bit naive, but their “Everlock” feature didn’t work as expected. (To be fair, they do say it’s still in Beta.) I just couldn’t get it to unlock at all, although it did unintentionally lock the door when I went outside for a second. I would hardly call this feature in Beta – it just flat out doesn’t work. When I did some more research online about it, I found similar experiences from others. 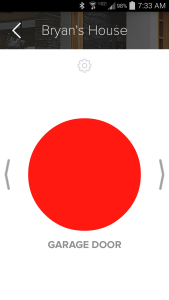 So I was forced to open the app every time I left the house and wasn’t all that pleased. I looked online to see if the app supported any intents so I could write another Android app to automatically lock and unlock based on my own geofencing – no go.

One other thing I didn’t realize was that the lock only uses Bluetooth and doesn’t use Wifi at all. This means you can’t lock and unlock the door unless you are in close proximity – probably a good thing from a security perspective, but not exactly “Internet of Things.” They should probably make this more obvious on the website.

Finally, the app also took a little while to connect to the lock each time I opened it. Not a huge deal, but I really don’t want to wait 5 seconds to connect and then unlock the lock when I can just pull out my physical key.

So instead, I used my handy dandy Tasker app and setup two profiles:

This supports my biggest 2 use cases: leaving for work in the morning (usually a couple of minutes after 7am) and arriving home, when I reconnect to my Wifi network as I drive into the garage.

Now instead of having to turn on my phone screen, find the August app, wait for it to load and connect, and then open the lock I can just turn on the phone screen and click the unlock button since the app is already loaded and connected.

It’s been about a month since I installed the August Smart Lock and thus far I like it. It’s not as much of a game changer as I thought, but has made my life a little easier. In the mornings I close the door and use the app to lock it as I’m getting into my car. And in the afternoon when I get home from work I unlock the door as I’m turning my car off.

On the weekends I have to start the app fresh when I leave, which is a bit of a pain because of the loading/connecting time, but it works great when I return because my phone reconnects to the Wifi which triggers Tasker to open the app.

First thing in the morning when I unlock the door and at night when I’m locking up the house I just manually rotate the August Smart Lock instead of using the Bluetooth app, just like I would a regular deadbolt. It’s not worth the wait time when I just do it manually.

One other feature that I haven’t really explored as much is letting guests in just by sending them a text message. I did a quick test with my wife (before she set things up) and it seemed to work pretty well. I just haven’t had a chance to use it yet.

I would probably recommend this to others if they like home automation. It’s pretty cool and I like how I don’t have to pull my keys out of my pocket anymore.