One of the benefits of working for BlueFletch is that everyone is urged to take training and go to conferences for things that interest them. A couple of months ago some of my peers chose to go to the Robots Conference (and, quite frankly, I was pretty jealous – building awesome Robots…I WANT TO DO THAT!). I made the decision a few months ago to attend the Sloan Sports Analytics Conference in Boston.

For those of you that aren’t familiar, the Sloan Sports Analytics Conference (SSAC) is a yearly event coordinated by MIT and sponsored by ESPN to get together all of the analytical minds in the sports business.  Nine years ago, it started out as a very small event on MIT’s campus, but has since grown into a 3000+ attendee conference.

My main goals going into the conference were:

The first session on the agenda was called Innovators and Adopters. It had a great panel: 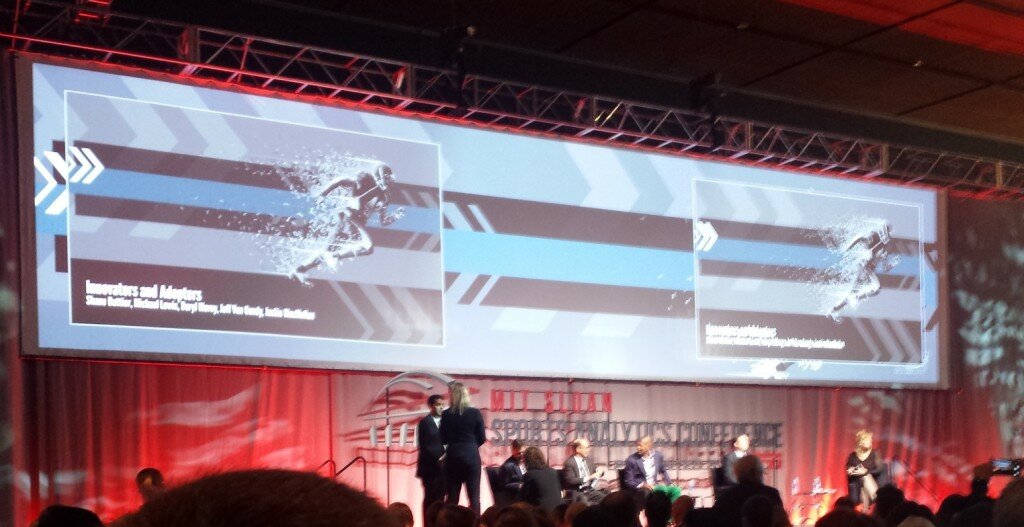 The conversation started talking about how much coaches should tell their players about analytics and why they are making certain decisions.  Michael Lewis talked about how NBA and NFL players are very articulate and smart; much more so than MLB players.  He said something like, “MLB players job is to shut your mouth, stand in the outfield…and don’t get so bored that you want to quit.”  HIs anecdote was that Billy Beane (Oakland A’s GM from Moneyball) would not tell his players anything – they were just lab rats.  That was the opposite of Daryl Morey’s relationship with Shane Battier, who used to play in Houston, where Shane Battier would get detailed scouting reports every day on his opponents and would use that knowledge during games.  His example was knowing Kevin Durant was X% more efficient going one direction, so he’d force him the other direction.

The discussion shifted to Shane Battier, whom Michael Lewis wrote a long article about in the New York Times.  They talked about how the unathletic Battier was always undervalued and his stats were never impressive, yet he always added a lot of value to teams.  During his last stop in Miami, he recalls a meeting with Coach Spoelstra: “Don’t do anything but catch-and-shoot, or catch-and-pass.  No dribbling.  No offensive rebounding.  Just catch-and-shoot or catch-and-pass.”  And that was his role.  But what Shane came to realize was that his job was creating space for his team.

This was a theme of Battier’s throughout the day – creating “space” for his more talented teammates, the LeBron James’s and Dwyane Wade’s of the world.  He just helps make his teammates better.  I think this is a great point that relates to what I do as a project manager.  At the end of the day, my job is to create space for the talented people I work with to get things done.  Like Battier, I rarely create deliverables and it’s hard to show evidence of what I contribute to a project, but I enable everyone else to do so.  Whether that’s navigating red tape, coordinating conversations with external teams to move a project forward, or filling in any gaps to help the team, my main focus is on getting everyone to work optimally with as few obstacles as possible. 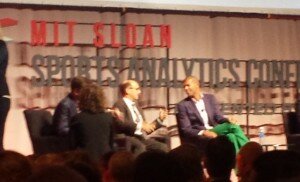 Some other hilarious exchanges occurred:

The more Shane Battier talked during the day, the more I was impressed with how intelligent  and thoughtful he was.  He seems like much more of a normal person than a 2-time NBA champion that spent 13 years in the league.  Juxtapose him with D’Antoni, who I thought was a very forward thinker with the run-and-gun Phoenix Suns that shot a lot of 3’s, but it turns out he just stumbled into shooting a lot of 3’s (which now turns out to be extremely productive).  He said there were no analytics that led him to preaching that strategy.

The first part of the discussion was about whether NBA analytics have become saturated, leading to less of a competitive advantage.  Everyone agreed that that’s not the case.  It’s true that all of the data exists, but it’s a lot more about communicating that information to the right people and having it implemented.  The analyst needs to tell the GM, who needs to tell the coach, who needs to tell the players, who need to use that knowledge in game.  That’s a whole lot of communication, that if not expressed convincingly at each level will ultimately be ignored.

But the NBA teams are not unlike our IT development teams – there’s an overall company philosophy that gets pushed by the CEO (NBA GM), the project manager that is responsible for the day-to-day (NBA coach), and the developers (NBA players).  So what’s a good example of “analytics” findings in the tech world?  How about a decision to use agile development methodology?  But it’s not as simple as someone just saying to do it – everyone needs to be convinced that it’s the best thing (communication!), and then it needs to get implemented, which also has its challenges.

Later, the panelists started talking about motivation for winning.  Put aside analytics, talent, and coaching – the number one motivator to players is peer pressure.  When the best players are the hardest works, the best listeners, etc., then the rest of the team falls in line.  When the best players are selfish and lazy, the team takes on those traits as well.  Shane gave an example: “LeBron is working hard, running up and down the floor – I can’t let him down, I need to work MY ass off.”

Again, an NBA team is just like any team, and this point emphasizes leading by example.  It’s not enough for someone in a leadership position to just bark orders and expect everyone to get their job done.  It’s important to inspire others by working as hard as possible myself.

To recap, my key takeaways from the day were:

Hopefully I’ll have time to add another post tomorrow.  I went to a very interesting session about the NFL real-time player tracking and another one that focused on sports science with biometrics, and that’s just from the first day – tomorrow is a whole other day full of interesting discussions.